I'm Back! Lot's of things have been going on the last year and a half, but I am prepared to jump right back in. I will be updating often this week, and I may also reach out to initiate some trades.

I completed another trade with William over at Foul Bunt right before I went into the hospital for my surgery. I sent him Heritage of his beloved Oriole's and he sent me, well I'll just let the pics speak for themselves...... 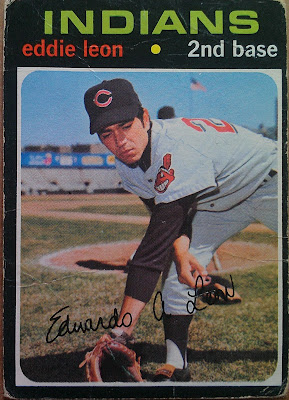 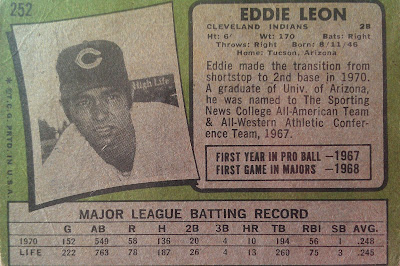 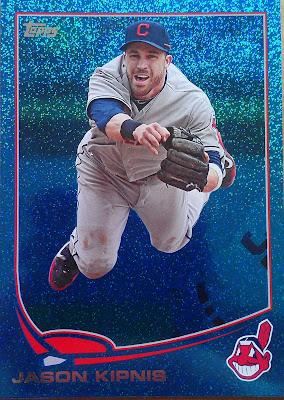 Yea, like I said, William delivered a gem of a package. First we have a 1971 Topps Eddie Leon. Leon played 5 seasons with the Tribe, no doubt having his best years in 1970 and 1971. This is my first of his cards, and I'm glad it is during his best years. Secondly, we have one of the most beautiful cards I have ever seen. Kipnis is easily one of my favorite current players. I have most of his cards and am now, with the addition of this, only 2 cards away from having his parallel's from Series 1 (Pink and Purple). This is actually the Silver Slate Redemption card so having it is extra special. Being that I was able to receive it thru trade and I didn't have to wait til I get back to work to purchase it, this is in my top 20 favorite cards of all time. He also sent me a 1969 Topps Dick Ellsworth but the file will not load so I will write about that when I can upload the picture. William once again you have delivered and I thank you for that. Head over, read his blog, and send him your Oriole's haha,
Posted by Unknown at 6:02 PM 1 comment:

Second trade and a first Relic....

My second trade I completed happened with Bryan at Golden Rainbow Cards. Bryan emailed me and asked if I could help him complete his rainbow needs in 2013 Series 1. I was able to send him a few of what he had left to complete, what I received however was a treat. First he sent me a few random Indian's cards, most of which were in better condition than the one's I already had which was awesome. But it only got better. 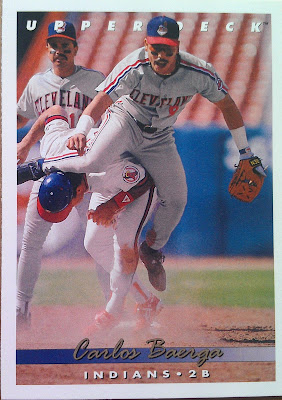 First, we have an awesome card of one of my all time favorites Carlos Baerga. I actually was surprised I did not already have this card because, well LOOK AT IT!! It captures Baerga at what he did best, turn a routine DP into a top 10 play of the week. I always would go into the backyard with a tennis ball, throw it against the house, and try to imitate play's that I would see Baerga do. Between him and Omar Vizquel, a kid could really get into shape. Back to the card's tho....the prize of the package had to be this..... 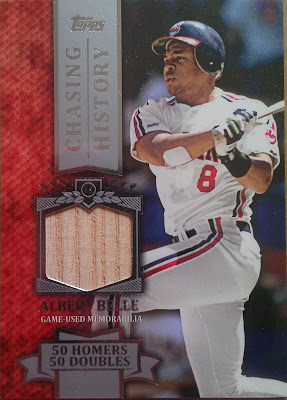 Bingo!! This is one of my top cards I wanted so far this year. Not only is it beautful, but my parents actually bought me (from QVC I believe) a 1995 World Series ball that has Albert's auto and 50/50 written below it. So when I saw this card was based on what he did that year I knew I had to have it. Fortunately for me, Bryan had one and sent it my way.

So cheers to you Bryan, and good luck on your rainbows. I'm sure this will not be the only trade we complete, as your blog is one of the more enjoyable ones I read.

Well I have completed a few trades now since beginning this blog. I have met some amazing collector's and have received some awesome cards. The problem? I haven't updated or shown any of them. So here goes nothing.......


My first ever "blog" trade happened with William over at FoulBunt. I happened to have a few Series 1 Emerald cards he needed, in return he had some Indians A&G I needed. 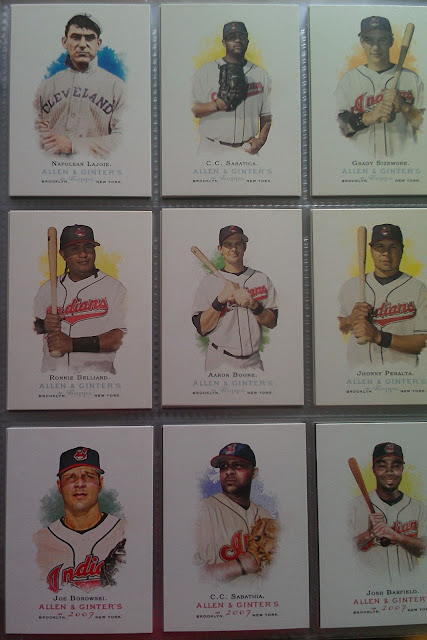 These are some 2007 A&G that unbelievably I had 0 of. I have always loved the A&G design but didn't actually start collecting the set's until it's 2010 release year. I'm not the best editor but I had to show these cards together on a page. They are flawless when together and fit seamlessly into my Indians team set binder. 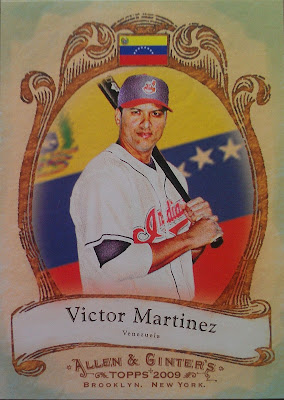 ....was this Victor Martinez National Pride insert card from the 2009 set. Not only is it an awesome picture of Victor, but the team colors really pop off of the background. Victor was one of my favorite Indians players. He actually played his minor league baseball with C.C. Sabathia for the Mahoning Valley Scrappers. The cool thing about that, oh yea, they are located 10 mins from where I live and I can actually walk to the field from work in about 4 mins. Unfortunately, the Scrappers haven't really had the players like Victor and C.C. since they left. Anyways, I have Victor's autograph from when he was a Scrapper and it's nice to add another card to my collection of his that I did not have. Even if he is a rival now.

So to William, THANK YOU for making my first trade a memorable one, and introducing me to this wonderful world of blogging.

Posted by Unknown at 4:56 PM No comments:

Well it appears to finally be that time. What time you ask, well it's that time that although not fully healed, I am able enough to finally start trading cards again and hopefully work on my blog. Being that I am still unable to work for probably another month, it should be easy. SHOULD be easy, make sure you notice the capital letters. If there is one thing I can tell you, sitting at home on the couch watching baseball all day everyday makes one go extremely lazy. Not a bad lazy mind you, but lazy nonetheless. Being unable to drive or lift over 10 pounds makes life very limiting, so I'm going to do something I've been meaning to do for a LONG time........... 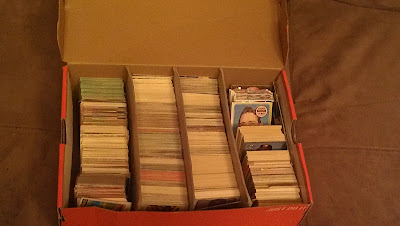 I'm going to finally go through boxes that have been unorganized and stored for at least 10 years. Thats right, I'm going to try and get organized. This is one of probably 4 shoe boxes that I have thrown cards in over the years, mostly when I was in middle/high school and have forgot about. Now don't get too excited, none of these cards are going to be anything but base, primarily from the junk wax era. But, you never know. I'm going to organize by team as there are probably 20-30 different sets from different years, none of which I have interest in completing if I haven't already. All of these cards will be available for trade (conditions are going to be anywhere from NM-Fair/Poor), so if any team interests you let me know and I'll put them aside for you. Indians are obviously off limits if any, and I have an idea where to send Baltimore, other than that email me at kaziken04 AT gmail DOT com and hopefully we can work something out. Until then, be safe and smile! Ken
Posted by Unknown at 7:24 PM No comments:

I have updated some of my want list and will work on it more tomorrow while also starting to update my trade bait. I will say I have gotten my hand on a TON of extra base and quite a bit of inserts from this years Series 1 and Heritage. I've been able to fulfill the wants of a few other fellow bloggers, could you be next?
Posted by Unknown at 7:27 PM No comments:

Back in the saddle..

Alright folks, I am feeling much better so keep an eye out as I will be updating my want list tonight and tomorrow. Also I will be taking pics and updating cards that I had received pre-surgery.
Posted by Unknown at 5:10 PM No comments: